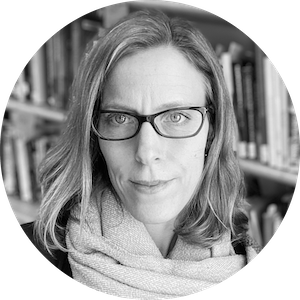 I am an art historian who works within and between the fields described as American art and Native American art. I began my career writing about modernism in the United States, which led me to write about Pueblo artists, whose work is underrepresented in scholarship. I am currently working on two book projects: one about U.S. modernist Georgia O’Keeffe (a celebrated painter of flowers and landscapes) and another about modern Pueblo painting (a new genre of painting that emerged in New Mexico and Arizona in the 1910s). My engagement with the field of Indigenous studies has led me to question how I write about non-Native art. I have been thinking about how scholars might decolonize U.S. art history, a process that has the potential to dismantle master narratives and reshape discussions of art about place, landscapes, and nature.

Let me start with what I mean by “decolonize.” Indigenous studies scholars understand the history of the U.S. as one of conquest and continued occupation. The field recognizes dominant institutions—from legal to cultural—as fundamentally colonial. Colonialism is ongoing as Indigenous peoples continue to fight against cultural exploitation, threats to their land and water rights, and for their sovereignty through movements from AIM (the American Indian Movement) to #NoDAPL.1

Anishinaabe curator Wanda Nanibush writes that “‘Decolonization’ is a word used to describe a number of processes of restoration, reparation, and restitution of Indigenous lands, bodies, cultures, and communities.” These are important steps in “unlearning toxic stereotypes and historical lies” and in changing dominant structures.2 Much of the work of decolonization has focused on Indigenous histories and objects. Scholars have convincingly argued for more ethical research practices that are shaped by Native scholars and engage with Native communities through actions like consultation, partnerships, and collaborative stewardship. This movement has been foundational to how I approach the topic of Pueblo art, leading me to consult with communities and descents of artists throughout the process of research, writing, presenting, and publication.3

Over the last five years, calls for decolonization have also led me to question my approach to and narratives about U.S. modernism. As Amy Lonetree has argued, one important way to decolonize history is through “truth telling,” or speaking the hard truths of colonialism by taking a critical look at U.S. history and by writing candidly about it, including about genocide and land theft. To decolonize U.S. art history is to acknowledge, reckon with, and decenter dominant assumptions that continue to disenfranchise, oppress, and silence Indigenous peoples today.4 The violent history of colonialism has long been justified by historical narratives that rescript the past in romanticizing and mythologizing ways. This problem becomes apparent when one reads conventional narratives about Georgia O’Keeffe.

In a recent essay I published in the journal American Art, I address this issue with respect to O’Keeffe’s paintings for the Hawaiian Pineapple Company.5 To summarize, in 1939 O’Keeffe travelled to Hawai‘i on commission to create paintings that would appear in Dole pineapple ads. The story that had gone untold was the part the Dole family played in the conquest and oppression of Kanaka Maoli—or Indigenous Hawaiians—a legacy sustained by the very type of ads in which O’Keeffe’s paintings appeared (Fig. 1). The story of these ads, and of O’Keeffe Hawai‘i paintings, is one of how the U.S. transformed the Islands into a “white man’s paradise” at the expense of Indigenous lives and land. O’Keeffe and other white painters of colonized landscapes created what Jolene Rickard has called the “art of dispossession.”6

These historical erasures are compounded by the ongoing use of colonial rhetoric in contemporary O’Keeffe scholarship. O’Keeffe is praised for “mastering” “exotic” landscapes and for “capturing” something “authentic” them. Problematic authenticity narratives are particularly common, as are equally fraught claims of possession. New Mexico is deemed “O’Keeffe country” by scholars and the tourist industry alike. Aileen Morten-Robinson critically describes this common type colonial framing as “the white possessive,” which serves those in power and justifies the disenfranchisement of Indigenous peoples.7 These engrained rhetorical practices are telling because they point to a target audience that is decidedly not Indigenous. Indigenous peoples are not exotic to themselves and their lands are not traditionally understood in terms of possession—not literal, not metaphorical. To decolonize U.S. art history, scholars must ask how artists consciously or unwittingly reiterated colonial power. Decolonization also requires art historians to recognize and address the ways in which dominant rhetorical practices today rest on white privilege and power.

Before the deadly Covid19 pandemic interrupted global mobility, I had been traveling to New Mexico each summer to work on my book on Pueblo painting. (I am all too aware of the irony of writing about decolonization while participating in very colonial practices, such as academic research focused on Indigenous culture and tourism on Indigenous ancestral lands.) When in Santa Fe, I take every chance I get to hike, run, and bike the numerous trails in the city and the surrounding region. During the summer of 2019, as I traversed these trails, I marveled at the tenaciousness and rugged beauty of the high desert flora. Among my favorite flowering plants are the orange paintbrush (Castilleja integra), yellow chamisa bushes (Chrysothamnus), and purple cholla cacti (Cylindropuntia; Fig. 2). What has occurred to me is that the large majority of the desert flowers I encounter are largely not among those depicted in O’Keeffe’s flower paintings from New Mexico. Most of the flowers I see are small and rugged yet vibrant. The flowers O’Keeffe is most known for painting in New Mexico—like the many she attached to the skulls of animals—are lush and full and their colors subdued (although, on occasion, she painted more vibrantly colored flowers too). She also tended to paint larger flowers, like colorful hollyhocks (Malvaceae) and the incredibly invasive Jimson Weed (Datura stramonium; Fig. 3). When O’Keeffe painted flowers in New Mexico, she chose to paint blossoms that were in keeping with her trademark style.

O’Keeffe is dubbed “the high priestess of the desert” and routinely credited for capturing New Mexico’s unique sense of place. She is persistently popular among New Mexico tourists, who often seek the aesthetic experiences of nature and landscapes constructed in O’Keeffe’s paintings. As a result, O’Keeffe’s botanical paintings of New Mexico have come to shape what viewers expect of area when they arrive.

These observations have led me to a number of research questions related to biodiversity, environmental colonialism, and cultural colonialism. My thoughts on these questions are in a very nascent stage. I am curious about how waves of conquest in the American Southwest—from Spain’s entrada to the United States’ annexation—changed plant life in the region, with particular emphasis on flowering plants in Taos and Santa Fe. What effects did environmental colonialism have on Indigenous peoples? There has been much discussion of how colonialism changed subsistence structures and agricultural, but I’m also interested in more subtle but equally important botanical changes. Additionally, I would like to identify the flowers in O’Keeffe’s New Mexico paintings with an interest in figuring out where she encountered them. In her garden? During her long walks? In flower shops? Which flowers did she focus on and why? As a colonial settler artist representing lands that were conquered and claimed many times over, what messages and meanings are conveyed through O’Keeffe’s flowers? Finally, I am interested in the dissemination of O’Keeffe’s New Mexico flower paintings via tourism and the culture industry. Do they become a sort of “invasive species” in themselves, whose introduction has harmed the local cultural ecosystem? These questions fall at the intersection of art history, botany, ecocriticism, landscape studies, geography, and environmental studies, and I’m looking forward to trying to answer some of them.