Holy Assemblages of Marble and Wood: Stylites and Dendrites as Cyborg Saints 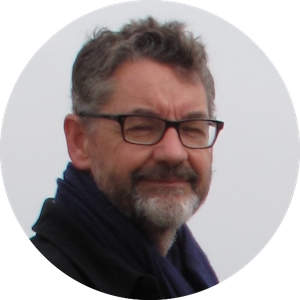 The Late Byzantine icon of the stylite saint Symeon and of the dendrite saint David, now at the Vatopaidi Monastery on Mount Athos, is a remarkable image of two figures merging with their ascetic prostheses. The inscriptions give little information: Symeon is hagios, and David is a saint from Thessalonike. But the assemblages that constitute their bodies are indeed strange, with Symeon tapering into a veined marble column and with David a human graft on a gnarled and twisting tree trunk. The two are in an image-frozen form of becoming-other. As Virginia Burrus has written recently, “saints expose the ongoing emergence, and submergence, of the human within the nonhuman, whether god, plant, thing, or animal.” In this way, they “position the human at the shifting borders of its own otherness.”1 This note attempts to follow through on these insights and briefly examine those shifting borders for what they reveal to us about how saints become cyborgs in their particular assimilation with their ascetic other. We might think of them as inert tools, a column and a tree, but the icon reveal these nonhuman elements to be inseparable from the saints’ bodies themselves.

The differences between the stylite and dendrite on the icon are not great, despite the apparent divergence in the marmoreal and arboreal appendages of the saints. That understanding of the essential relations between column and tree dates to some of the earliest writings about prehistoric religion. Historians of religion and archaeologists in the nineteenth century and early twentieth found common purpose in columns and trees, for example, the explanations for the prominence of pillars in the prehistoric art and culture of Crete, which Arthur Evans (1851-1941) named after the legendary king Minos. Evans presumed that religion and art moved naturally to monotheism and figuration, and so he argued that the prominence of wooden columns in Minoan architecture and art derived from columns’ origins as trees.2 In other words, the sanctity of holy trees carried beyond their lives as trees and continued to imbue the remnants of the trees after their milling and into their employment as architecture. This ongoing presence of sanctity in vertical, wooden columns was simply a step on the way to the figurative stage of Greek art and religion, a transition to the more ‘fully developed’ stage of ‘civilization’ represented by Greeks and Romans, which was then fulfilled by Euro-American civilization of the nineteenth and twentieth centuries.

However flawed that model turned out to be, the importance of trees and columns is difficult to ignore, and in a recent work, Sarah Jane Tully has continued to argue for integral connections between pillars and trees in Ancient Near Eastern religion.3 In her view, the evidence does not allow one to see historical trajectories from aniconism to figuration along the line of Evans’s model. Rather, the frequent presence of trees and goddesses in Minoan art has to be understood as an active constellation of trees’ powers and abilities in areas of human life such as fertility, death, regeneration, order and stability. Trees, columns and deities are found, mobilized and made present in forms like a tree or a vertical shaft (wooden or stone).

The historian of ancient religion Martin Nilsson had been skeptical of the claim that pillars could have power, except as supporting members for a building, but he also adduced a number of examples from Hebrew scripture in which pillars are named and are freestanding, the presumption being that a certain numinous power was believed to adhere to those objects.4 For example, the brazen columns before Solomon’s Temple were called Jachin and Boaz, meaning the Stabilizer and In Him Is Strength, respectively, and the dimensions of the pillars were likewise recorded (I Kings 7: 15, 21).

Just the same, Evans had been able to produce proof texts in the same tradition for the animation and holiness of trees, and he cited 2 Samuel 5: 24, in which the poplar trees communicated the presence of the Lord before the army of David as they advanced toward the Philistines. And other sacred trees are apparent in scripture, like the oak at Mamre and the bush at Sinai, to mention just two.5 In the Greek tradition, trees continued to have a central ritual and prophetic importance, as Nilsson and Evans agreed, and cult centres like Dodona in Epiros continued to function until the late fourth century C.E., when the oak of Zeus was cut down. I wouldn’t argue that trees and columns are natural complements that are always found together, if one looks closely enough, but some modern examples are highly suggestive. In his study of the cult of trees in contemporary Crete, Peter Warren describes tree veneration at the Panaghia Myrtidiotissa where a column capital is associated with the sacred tree there, and at the Mone Panaghia Palianes, an icon folded into the trunk of a tree on which it had been hung, and the tree was then considered identical with the Virgin herself.6

These examples reveal the possible movement of signification among these elements of wood and stone that derives from belief in the inherent power in these entities so powerfully present and active in the natural world. I recognize the complexity of the different histories of stylites and dendrite saints, of course, and I don’t want to suggest confusing and simplifying them to the point of identity. And yet, maybe they’re not so complex at an important, basic level either. This icon is precious (and indeed unique to my knowledge) evidence of how tree, column and human come to form holy assemblages that transcend natural and human discrete forms. Their natural abilities as saints are intensified in this cyborgian state in which they are shown. And their strange hybrid natures are then magnified and also distilled in these new bodies. And finally, the pairing of the two is not accidental, and it can’t be explained by a shared feast day or common place of activity—although dendrite saints are frequently said to have come from the east, in a vague way. Rather the pairing here was determined by the special conditions of their bodied assimilation to their mode of asceticism, their move to a shifting border of their own otherness, which shows to us their superhuman and human claims to becoming other that is open to any human, potentially.


1. Ancient Christian Ecopoetics: Cosmologies, Saints, Things, Philadelphia, 2019, 127.↩
2. Arthur J. Evans. “Mycenaean Tree and Pillar Cult and Its Mediterranean Relations,” Journal of Hellenic Studies 21 (1901): 99-204.↩
3. See Caroline Jane Tully, The Cultic Life of Trees in the Prehistoric Aegean, Levant, Egypt, and Cyprus, Louvain, 2018.↩
4. Martin P. Nilsson, The Minoan-Mycenaean Religion and Its Survival in Greek Religion, 2nd ed., Lund, 1950, 236-61.↩
5. Evans, “Mycenaean Tree and Pillar Cult”, 113-4, where he also writes, “What gives the tree and pillar cult of the Semitic world and its borderland such a special value as an illustration of the distant records of the Mycenaean worship is its long continuous survival. While the aesthetic sense of the Greeks transformed their rude aniconic idols into graceful human shapes and veiled the realities of tree-worship under elegant allegories of metamorphosis, the conservative East maintained the old cult in its pristine severity. The pillar or cone, or mere shapeless block still stood within the sacred grove as the material representative of the divinity. In the famous black stone of Mecca, Islam itself has adopted it, and the traditions of pre-Islamic Arabia maintain themselves in the shape of countless lesser Caabas and holy pillars throughout the Mohammedan world. In how unchanged a form this ancient pillar cult of the Semitic races still survives— even upon what was once counted as Hellenic soil—will be seen from a striking illustration given below from personal experience.” He vividly describes an encounter with a pillar cult in Macedonia at the end of his long study.↩
6. Peter Warren, “Tree Cult in Contemporary Crete,” in Loibe eis mnemen Andre G. Kalokairinou, Heraklion, 1994, 261-78, where he also writes at 275, “Yet, practices once established and beliefs once formed, and sustained over long periods, are likely to build up memory banks and to become part of the consciousness of how things are always perceived and done, aided by the permanence or long-lived nature of features of an environment, such as trees.” And see Lucy Goodison, Holy Trees and Other Ecological Surprises, Dorset, 2010, 8-11.↩