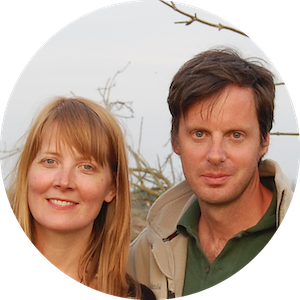 By Susannah Sayler and Edward Morris

Susannah Sayler and Edward Morris (www.sayler-morris.com) teach in the Transmedia Department at Syracuse University, where they co-founded The Canary Lab, a center for art + ecology. They are an artist-duo who work with photography, video, writing, installation and open source projects, using these media to think about ecology and to inspire ecological thinking in others. They are also concerned with the way that cultural production contributes to social movements, particular the climate justice movement. They are also co-founders of The Canary Project (www.canary-project.org)&#8212a studio that produces visual media and artworks that deepen public understanding of climate change and other ecological issues. The following is more about their practice.

Our current work began with a landscape photography project titled, A History of the Future in which we photographed places where scientists study the impacts of climate change. We were inspired by Elizabeth Kolbert’s book Field Notes from a Catastrophe: Man, Nature, and Climate Change, and wondered what could be seen of climate change in the still image and how it might participate in the conversation about changes to the planet. The work had activist origins and underpinnings. What we found was that our photographs can do this work, but their nature is more contemplative, and we were interested in doing work that could reside in different places across a spectrum of art and activism. That’s why we started The Canary Project, a platform that allowed us to work with many different kinds of artists and media, from the open and clear to esoteric and complicated.

Originally, The Canary Project’s mission was to “deepen public understanding of climate change,” but over the years we expanded our mission to talk more broadly about the Anthropocene—how humans are affecting the ecology and the earth more broadly. In the past year our mission has transformed and we will discuss that later.

As artists who work in the realm of activism and social justice, with every project we’re combating a prejudice that is a relatively recent development in western art – where art is regarded as being autonomous, in its own sphere: “Art for art’s sake.” If it’s thought to have any kind of rhetorical purpose, then it can’t possibly be expansive in the way that art is supposed to be. These notions are, frankly, bourgeois in a historical sense. In general, activism is necessarily reductive. It’s about consolidation of power. It’s about reducing the message so that many people can get behind it, and there’s a certain level of untruth in that reduction. With art you want to respect complexity, you want to be truthful, and art has to have a “ricochet effect”. It has to keep bouncing around in your head. It has to not close anything off. How you keep that ricochet going while still being productive in the discourse – that’s the thing we’ve been trying to figure out. And we’re still figuring it out.

We recently announced a new project called TOOLSHED (www.tool-shed.org) that represents a transformation in our mission stemming from an acknowledgment that the climate movement has entered a new phase. No longer just a matter of sounding the alarm or waiting for help from policy-makers, we must urgently assemble and distribute tools for building resilient communities, tools for seeing the world in a new way, tools for finding joy and common cause. Our new project, Toolshed will cultivate community-based projects by bringing together artists, activists, educators and others actively engaged in transformational change, and by gathering essential tools useful to all, including place-based knowledge, modes of imagining, old and new technologies, actions, ideas and objects.